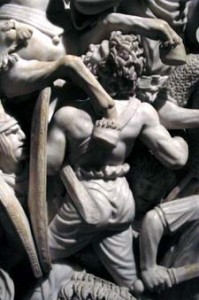 Be careful watching this if you are prone to vertigo….

What brilliant darkness now descends
To slay the weight which life doth rob
To bear the anguish undeserved
On frigid stone no glorious end.

The blazing lanterns light the night
As noble leaders drain the cup
To toast the end of ghost not known
And praise the triumph of blind sight.

The blazing lanterns light the night
As slumbered warriors wrap their cloaks
And starlight bathes the tethered beam
Where blood poured out in sacred rite.

What brilliant darkness now breaks bright
With light a sun can scarce reflect
To roll the stone which triumphs death
The lamps of countless souls to light.

Have a blessed and fruitful Easter. God bless.

Amazing — and in no small way, terrifying at the same time.

And the hits just keep on comin’ from our enlightened masters in government-run health care:

During the health care debate, the Mayo Clinic, the Cleveland Clinic, Geisinger Health System and Intermountain Healthcare were repeatedly touted as models for a new health care delivery system.

Now, they have something else in common: All four have declined to apply for the “Pioneer” program tailor-made by the Obama administration to reward such organizations.

“When the poster boys ask that the posters be taken down, you have a problem,” says Michael Millenson, president of Health Quality Advisors LLC…

The four health systems are considered the most promising models for “accountable care organizations,” a new approach to delivering health care services that rewards doctors and hospitals for providing high-quality care to Medicare beneficiaries while keeping costs down. The ACO provision became one of the most highly anticipated elements of the health care overhaul, and providers embarked on a frenzied race to join in as quickly as possible.

But when the proposed regulation for the program was announced in March, excitement fizzled.

Hospital and doctor groups complained that the program created more financial risks than rewards and imposed onerous reporting requirements. The American Medical Group Association, which represents nearly 400 large provider organizations, responded with a letter to CMS warning that more than 90 percent of its members would not participate because of the reporting requirements and financial disincentives. In particular, the proposed rule would impose penalties for ACOs that do not achieve savings.

In response, HHS announced the Pioneer program in May, promising it would “provide a faster path for mature ACOs” like the Mayo Clinic that would allow the high-performing health systems to pocket more of the expected savings in exchange for taking on greater financial risk. HHS estimated that the Pioneer program could save Medicare as much as $430 million over three years.

The big boys in health care were so impressed by the latest-and-greatest rendition of Obamacare’s hot new ACO “reform” (which is little different than the disastrous capitated HMO model which went down in flames not so very long ago) that they responded, “Thanks, but no thanks.”

No doubt a new rendition of ACOs will be forthcoming soon, complete with a host of new regulations, onerous reporting requirements, and penalties for care which does not meet “quality” (AKA, low-cost) standards set by the government. After all, who knows more about “quality” than our sharp-witted wizards in Washington? Be afraid — be very afraid…

Centralized funding and control of health care is beyond disastrous. It is paving the road to national bankruptcy. The answer to this monstrous failure is, as always, more control, more regulations, more centralization. Sadly, like a runaway train, it hurtles down the tracks toward an inevitable trainwreck.

Let’s just hope and pray that there will be some salvageable pieces left when it all jumps the tracks. Physicians who have wedded themselves to hospital-based and other large ACO-aligned medical groups for security will find themselves among the wreckage.

The only hope for physicians in the long run is to move outside the current system of third-party payers and decentralizing toward a cash-based practice. The inevitable outcome of the coming disaster in health care (and no, our politicians won’t prevent it) is severe rationing of care, long waits for doctors visits, diagnostic studies, and surgery. For patients, catastrophic coverage (if you can get it) with HSAs will ultimately prove the safest and most reliable way to get access to health care.

Welcome to health care in the millennium.